I was working with a coaching client this last week, who is going through a powerful time of transition. He was contemplating out loud with me who to turn to for support. “I feel like I need to be around someone with a higher frequency, someone who can lift me up through their clarity and compassion.” Then he made reference to one particular gentleman who is teaching in India, a man who has a -ji added to the end of his name.

It is a very familiar scenario, that we have all been exposed to, directly or indirectly, over the last decades. Someone sits at the front of the room or auditorium, often on a raised seat, as often as not wearing white clothes, or at least usually not blue jeans and an old t-shirt. People who sit at the front of the room in this way often have a -ji added to the end of their name. Bubba-ji, Swami-ji, Joe-ji, Chuck-ji, Wolfgang-ji.

Once I met a man in Italy whose name was Gigi. I spent a good hour persuading him to become a spiritual teacher, so then he would be known as Gigi-ji. 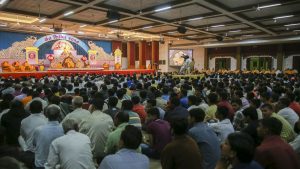 In the theater created around any of these -jis, everyone else sits on the floor and stares at the front of the room, in states of rapture and devotion. Every word hits home to the heart as “the Truth.” Everything seems to become crystal clear and luminous. Gatherings like these certainly have their benefit. I spent many years of my life as a recipient of such transmissions. Indeed, I must admit I have also spent other periods of life sitting at the front: as the transmitter. But there is also a downside to this kind of theater. It is easy to become dependent on the presence and charisma of another human being, which can in fact reinforce the identity, “I am a seeker, there is something wrong with me, I am not yet complete. Not like Gigi-ji.”

Years ago, I was invited to give a talk at the Unity Church in San Diego, California. It is a kind of mega-church, in the new thought tradition, and attracts close to a thousand of people on Sundays. I dutifully gave my talk on Friday evening and then they had organized a workshop for me on Saturday and Sunday. Halfway through the Saturday morning session, a short, stocky man stood up. He was red in the face and obviously very upset, “You’re not the real deal,” he said to me, pointing his finger accusingly. “I’ve sat with Byron Katie, I’ve sat with Eckhart Tolle and I’ve sat with Gangaji. I know the real deal when I see it, and you’re not the real deal.” He continued with loud demands for a complete refund and encouraged everyone else in the room to ask for the same.

I had to digest his words for a few moments. Someone that upset and angry usually has some kind of a point that is worth considering. Finally, I said to him, “Yes, thank you, you’re absolutely right. It’s very perceptive of you, I am not the real deal, nor did I come here today claiming to be the real deal: for you or for anyone else. I can’t tell you what’s right for you, or for any of you, but I can tell you what’s worked out well for me. You see, I’ve spent a good deal of my life looking for the “real deal” in another human being. Even when someone is eloquent, extremely present, compassionate, or appears to be very ‘enlightened,’ I was still looking outside myself for some kind of transmission that would make everything magically okay. Once again, I can’t tell you what’s right for you, but I can tell you what’s worked for me. I’ve found another direction in which to focus my attention. Not outside to other human beings, but instead to become curious about that which is aware, to become curious about that which hears the sounds and sees the movements in this room. You could call that consciousness, awareness. It has no name and form. Just one drop of recognition — of this consciousness without content — changes everything. That is the only real deal that I have found to be reliable. But as I said, I can only speak for myself, I do not really know what is true for you, and of course I would be happy to give you a refund.”

By the time I had finished speaking, that man had changed his demeanor quite considerably. He was no longer red-faced and angry. In fact, for some inexplicable reason, he was close to tears. He sat quietly back down in his seat, and stayed for the rest of the weekend. In fact, that man went on to take five consecutive coaching trainings with me and became an Awakening Coach. Who would have guessed?

I told that story to my coaching client this week and I asked him what he made of it. I reminded him that at one time in his life, he had looked up to his father, and later felt disappointed and betrayed. I reminded him of the stories he had told me about many people he had been close to, who had not seemed able to fulfill his needs. I asked him to consider if his quest for someone with “higher consciousness” or “higher frequency” might just be part of the same habit of looking for something outside himself. 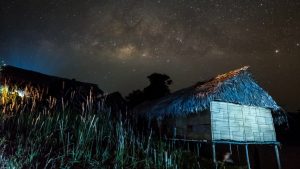 Let me finish my little rant today with another story that I love very much. It is the story of Mira, a mystic who lived in Persia. One night she was outside her hut, in the moonlight on her hands and knees, looking for something. A neighbor walked by and asked, “Mira, what are you looking for?”

“I dropped my embroidery needle,” Mira replied. “I earn my living with embroidery, so I have to find it.” The neighbor also got down on his hands and knees, and helped to look. Other people came by, until it was quite a gathering of friends, all searching in the moonlight, outside the hut, for the missing needle.

Finally, someone stood up and asked, “Mira, we searched high and low for the missing needle. Where exactly did you lose it?”

“I lost it inside the hut,” said Mira.

“Why are we looking out here then, if you lost it inside the hut?” asked the neighbor.

“It’s very dark in the hut,” said Mira, “Out here at least there’s the moonlight.”

It is just like that you see. When you look into your own nature to find the real deal, you will find it because that is where it was lost. But it is a little dark, we have to sift through various shadowy illusions before we can get to the essence of things. It may seem more convenient and attractive to look outside, to a glittery charismatic figure with -ji at the end of the name, but there is no point in looking outside the hut if what you lost was inside.