Recently I completed a visit of a few days to Tel Aviv in Israel. It is an extraordinary area, steeped in history and culture. This is an incredible part of the world to experience a rich diversity of colors, tastes, music, and language.

The Canaan (also known as the Levant) is the area east of the Mediterranean sea. It is the original home of the Jewish people, and the setting for every event that takes place in both the Old Testament and the New Testament of the Bible. Living in Judea, the Jews went through periods of relative calm, but also tumultuous times of famine, being exiled from their own land and made slaves on more than one occasion. The last time this happened was in 70 A.D. (the beginning of what is known as the diaspora), consistent with an ancient prophecy that the Jewish tribes would be spread to all the corners of the earth, and no longer have any homeland. This sense of not belonging anywhere came to a ghastly crescendo, of course, with the Holocaust. After the war, the United Nations voted in 1948 to create the state of Israel, and finally to secure a fixed home for the Jewish race. This would be a seemingly happy-ever-after story, after these thousands of years of displacement, were it not for the fact that during this long period of exodus (almost 2000 years) Arabic Palestinians also came to see this same area as their home. Understandably so. 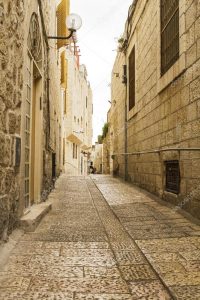 The city of Jerusalem, for example, is the central most holy place on the planet for three major religions. The original Jewish temple built by David was there, replaced by the second Temple built by Solomon. The Holy of Holies. Literally around the corner is the Via Dolorosa, where Jesus was forced to carry his cross to Calvary. Jesus was born half an hour drive to the south in Bethlehem. Finally, to make matters even more complex, built exactly on the same site of Solomon’s Temple (now destroyed) is the Al-Aqsa Mosque, (the “farthest Mosque”) from which the prophet Mohammed is said to have ascended to heaven. So the land of Canaan is not only claimed as home to people with different languages, cultures, and beliefs, but is also the non-negotiable most sacred land to three religions.

It is into this uneasy tension that you enter when you visit Israel. The security concerns many tourists feel in anticipation are exaggerated. Wandering around Jaffa (part of Tel Aviv) at night I enjoyed Jewish people laughing and eating together, side by side with Arabs also doing their own thing, Christian tourists visiting the Holy Land, as well as a good smattering of not particularly religious people as well. I have frequently felt more tension and violence brewing in the air of many American inner cities at night than I did in Israel.

Ethnic tension is there, nonetheless, and every now and then it erupts into violence, particularly in Jerusalem, and every few years into actual warfare. Arabs and Jews in Israel live more or less peacefully alongside each other, but they don’t live together. There are distinctly Jewish restaurants and shops and music and language, and there are Arab equivalents. There are Arab weddings and Jewish weddings, but not attended by the same people. The two populations keep a cool distance from each other. It is this sense of “those people are different than me” that can erupt into violence. 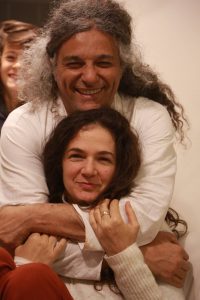 All of this is what makes the story of Ora and Ihab Balha so unusual and inspiring, and a potential catalyst for hope. Ihab is an Arab Israeli. His family (Palestinians) have lived in Jaffa without any break for more than six hundred years. He is deeply immersed in Sufism, the more mystical aspect of Islam. He visits the mosque several times a day. Ora Weil was born and raised, just as immersively, into a Jewish family. Her grandparents returned to the Holy Land after the war, both her parents were born and raised as Jews in Israel. Ora and Ihab were the kinds of people in Israel who don’t generally have much opportunity to get to know each other very well.

Around fifteen years ago, they each independently made a last minute decision to take a short vacation in the Sanai desert of Eastern Egypt. It was there that they met spontaneously. Once they saw each other for the first time, neither one of them could look away again. Very soon afterward they got married, which created some raised eyebrows in each of their very different families, but everyone adjusted.

It was when Ora got pregnant with their first child, that it opened the big question: how will the children be raised? In Israel there are Jewish schools, where Hebrew is taught and spoken, and there are Arab schools, but more or less everyone will go to a school consistent with the religion and language and culture of their family. Which school would the children of Ora and Ihab go to?  There was no school like that, marriages between Jew and Arab was almost unheard of.

Cradling Nur, her newborn son, Ora knew that she would not send him to a Jewish or an Arab kindergarten. Because there was no other option, they decided to create one. It started as a private project with two children, The “Orchard of Abraham.” The small earthlings who attend this school are first and foremost Humans, and only secondarily Muslim or Jewish. 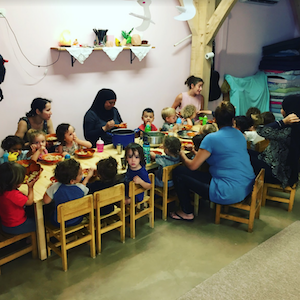 Each and every classroom has a mix of Arab, Jewish, and Christian teachers, songs are sung in both languages, dishes from both cultures are served, and both languages are taught and spoken. When the parents come at noon to pick up their children, they keep a cool distance from those of the other culture. At first. But as you can imagine, friendships between these kids develop naturally. They want playdates, there are birthday parties, sports activities, then ride sharing, all the usual kid things happen. Families learn to develop real care and affection for each other.

Children of three or four years old do not naturally identify with each other as Arab or Jew. They are, first and foremost, Humans. Slowly this simple, loving and peaceful way of being with each other rubs off on their families, and the parents also learn to be, first and foremost, Humans too — and only secondarily Arabs or Jews. People who are Human First in this way will not become terrorists, or endorse divisive politics. Psychologists agree that children get their most decisive conditioning in the first seven years of life. If a child is not taught to hate by the seventh birthday, they will probably stay Human First for life.

For more than eighteen years, Ihab has been close friends with Bharat Mitra and Bhavani Lev, the founders of ORGANIC INDIA. You may remember Bharat from interviews and books where I have described their inspiring work. In 2012, Ora and Ihab were invited by Bharat Mitra and his wife Bhavani to the UPLIFT Festival in Byron Bay, Australia. Originally planned as a birthday party, this morphed into a gathering of friends who each had visions and projects to change the world in a positive way. The circle that naturally emerged offered encouragement, inspiration, and strength to such visions.

Ora and Ihab went to the Uplift Festival with one kindergarten, and came away inspired with a global vision, now called “Human First.” The center in Jaffa is a kindergarten in the morning, a place for community projects during the day, and a cultural center in the evening. The center brings together not only the children, but entire families and communities to share food, recipes, culture, music, and community projects

I spent five minutes in this Human First Kindergarten while I was there, and it has lit a fire in my heart that now keeps burning more brightly. 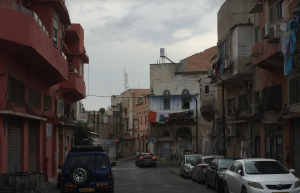 They are in conversation with the mayors of Jerusalem, Haifa and other cities for similar centers there. They have a plan to foster independent centers to open like this in one hundred Israeli cities in the next years. What about the West Bank, and even Gaza? What about the rest of the world? This vision seemed impossible a few years ago, and now it is a reality, ready to be duplicated. Who knows how far it could go? Imagine Uplift Centers like this in Belfast, in the border towns of Texas (with children from both sides of the border), or in Washington D.C.

“Imagine there’s no countries, it isn’t hard to do. Nothing to kill or die for, and no religion too. Imagine all the people living life in peace. You may say I’m a dreamer, but I’m not the only one.  I hope some day you’ll join us, and the world will be as One.”

Ora, Ihad, Bharat, Bhavani and Guy have dared to imagine, and they have made it real. Now many more are joining them. The possibility of a world being as One becomes a little more real.  I am so down with this. How about you?