Too Important To Rush It

Too Important To Rush It

This year, I am working with four different coaching clients to complete books. Obviously, this kind of collaboration is quite intensive and requires both partners to be “all in,” so I am pretty discriminating about which projects I take on. It has to really make my soul sing for me to be willing to put months of my life into it. Having already finished eleven books on my own, I am quite familiar now with the territory: do anything enough times and it becomes just like getting out of bed. In contrast, by working with people who have never written a book before, I have noticed all of the pitfalls, many of them natural and inevitable, which get in the way.

The two most prevalent habits I am aware of, which interfere with the natural flow of a book, or indeed any other creative project, are procrastinating and rushing.

Most of us do not need much explanation of either of these automatic habits. They are all too familiar. Procrastinating often happens when we set ourselves too ambitious of goals. I am going to get up at three o’clock every morning and spend five hours on my book every day before work, or, I read somewhere that Stephen King could finish a book in two weeks. If he can do it so can I. There are lots of versions of this theme, but every time we put ourselves under too much pressure, we end up procrastinating. I will do it tomorrow, I will do it next week. Probably eighty percent of the people who end up working with me to finish a book do so because of this habit. Left to themselves, they would never get it completed. It just keeps getting delayed… and delayed… and delayed. 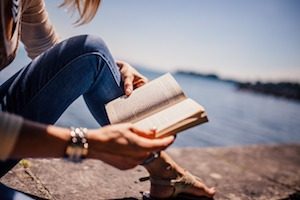 The solution to procrastinating is to break things down into the tiniest chunks, where you can feel successful. My friend and colleague Jonathan Robinson advocates committing to just five minutes every day…but then really doing it. Make a promise to yourself, preferably to an accountability partner, to work on your book for five minutes at the same time every day. If after five minutes the flow is not happening, no problem, you did what you said you would. But if the flow is happening, then let it take you over.

The other habit which gets in the way of singing your unique song — brilliantly — is rushing too quickly, and it is often the result of having procrastinated too long. This means you get into a panic and you realize that everything is going too slowly. You want the book out yesterday, and then you cut corners to just push it through. It is actually possible to do this by looking for ways to do things quickly and “efficiently” but the problem is that you almost end up with a second rate book. In today’s world, where more and more people are able to write books (because of digital publishing) and less and less people have time to read entire books, you need your book to be readable and insightful as possible if you want a chance of it even surviving.

Almost everybody I work with, with very few exceptions, falls prey to one of these two habits: procrastinating or rushing. One of the books I am working on right now is with a very brilliant man named Stefan Grafstein. Stefan has spent most of his life in the world of adventure sports: taking rubber boats down class five (or higher!) rapids, skiing off cliffs, or surfing the biggest waves. Stefan has become a master in the world of risk. He has been able to create a definitive “anatomy of risk,” which he has been able to test for accuracy with hundreds of people. Taking risks and doing bold amazing things actually follows the same six steps, time and time again. You can read more about them soon in his book.

One of the most important insights that Stefan makes in his book, which is really the pivotal key to taking risks intelligently and effectively, is that we are almost constantly influenced by different voices in our heads. He breaks these down into three categories. The emotional voices, which he summarizes as “the child,” influence us through contracted feelings like fear, anger, jealousy, etc. The mental voices, which he groups as the “inner critic” is the result of overthinking everything. We ask everyone and their grandmother for advice about what to do and end up weighing the pros and cons of everything all day.

The third kind of voice he calls “inner knowing.” It is that still small whisper that knows exactly what to do. It is unemotional, calm, and still. 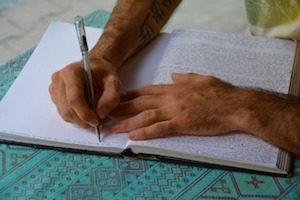 Both procrastinating and rushing are inevitably the result of being propelled either by undigested emotion or by overthinking things and listening to other people’s opinions too much. The inner knowing, the still quiet voice of inspired certainty is the way to transcend both going too fast and too slow. It knows the steady pace of the next right thing to do.

If you are working on a book, music project, painting, new product, or social innovation and you sense that your gift will make a positive contribution to all of us, then what you are doing is much too important to go too slowly or too fast.