The Brilliance of Living a Misfit Life

The Brilliance of Living a Misfit Life

My latest book, Radical Brilliance, is the fruit of my lifelong experience of feeling like a misfit.

I was born to very intellectual and also very neurotic parents in London in the 1950s. The world of my childhood was scattered everywhere with books. For my first birthday, when kids today might get a stuffed animal or a squeaky toy, I got The Complete Works of William Shakespeare and The Oxford Book of English Verse. My parents and their friends discussed movies, novels and philosophy. A person’s worth was not measured by their capacity to love, or their financial stability, but by their intellectual and creative acuity… by knowing what the word “acuity” means. With tremendous pressure to achieve and produce in this arena myself, I got good at the game, and earned a first-class degree from Cambridge University in English Literature. But I also felt empty, that this world of the intellect was not my real tribe. There was something missing…

This feeling of emptiness started in my teens. I went to the King’s School in Canterbury, one of the oldest schools in England, nestled under the shadow of Canterbury Cathedral. While walking one day through the cloisters, dressed in the uniform of a wing collar, black jacket, and boater hat, I met a Hare Krishna monk sitting just a few feet from the wall of the Cathedral. “Hare Krishna, Hare Krishna, Krishna Krishna, Hare Hare,” he was chanting. I was fascinated. I waited patiently till he was finished, and then shyly approached him. “Excuse me, sir, do you speak any English?” I timidly asked the Indian-looking holy man. “Yeah mate, sit down ‘ere. I’ll tell yer ol abadit: Krishna … reincarnation … enlightenment.” My monk was a cockney from the East End of London.

I was overjoyed. Everything he said made perfect sense. The real purpose of life was spiritual liberation. That night I called my mother from the red phone box just outside the school walls. “Great news, Mummy,” I said. “I’ve found my real calling in life. I’m going to become a Hare Krishna!” She knew something about them, because they had been chanting up and down Oxford Street in London, to everyone’s dismay. My mother promptly threatened to commit suicide, which was her default setting when faced with unwelcome news. We had to forge a quick compromise. Instead I would learn Transcendental Meditation. 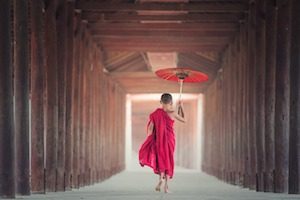 Various flavors of spiritual seeking became a central part of my life for the next twenty years. I meditated, I went on long retreats, I traveled many times to India. I learned yoga, and mudras, I changed my diet, I wore beads. I adopted an oriental name. But there was still the feeling of something missing. Making your life about Nirvana, “snuffing out the candle,” dedicated to emptiness, also felt incomplete. I noticed that most of the spiritually oriented people I knew – more advanced than me – were still waiting for the carrot of Enlightenment, dangled at the end of the stick. Everyone was on a path; no one had arrived. Again, I did not feel completely at home in the spiritual crowd.

Spirituality is often about leaving behind the personal, bypassing your humanity, but it can also put us in touch with the shadow. I realized that I was carrying wounds from childhood, and that I was unconsciously causing both myself and other people unnecessary pain. This caused me to align with yet another subculture: psychotherapy and the world of “working on yourself.” Have you ever seen those magazines that you sometimes find in coffee shops? In the Bay Area it is called Common Ground, but you see them everywhere. They usually have a couple of articles, but then they also have seemingly endless advertisements for Rolfing, chakra balancing, past life regression, dolphin channeling, you name it. Over time I did just about every one of the strange woo-woo things advertised in those magazines. If it is available as a way to heal yourself, or fix yourself, or improve yourself, I have probably done it. But in just the same way, after years and years of diligent attempts at self-improvement, I also came to feel that there had to be something more. While it was invaluably important to self-reflect, for me this also became another endless hamster wheel. 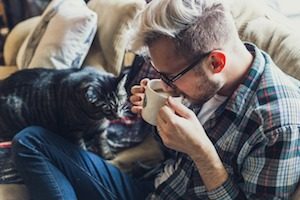 Finally, in my late twenties, I realized that I had spent most of my life up to that point meditating and introspecting. I also needed to get my sh*t together, and make some money. So I got familiar with another subculture: with the people who love to get things done. Be productive, manifest, create abundance, activate the Law of Attraction, and be healthy, wealthy, and influential. It was actually not so difficult. In 1987 I founded a school in Seattle to train psychotherapists how to integrate hypnotherapy into their practices. I trained more than 300 people in three years. I also bought a house that doubled in value, so for $12.5K down, it yielded about $150K when I sold it. In three years I had accumulated enough to stop working, if I could live simply. Making money and being “successful” also quickly became an empty goal. As my clients made very obvious, winning at the material game did not lead to any kind of reliable happiness.

Throughout all these different phases, I have always also had a strong sense of political and social activism. I’ll easily donate my voice, and my time, and my dollars to environmental causes, advocating for women’s rights, indigenous people, and many other worthy pursuits. Important as all those things are, activism also left me questioning: how much of a difference can I really expect to make? Even if we do save some trees, or enact new legislation, is that going to allow me to feel that I’ve led my brief life intelligently?

In fact, I have discovered that all of these things – intellectual and artistic creativity, spiritual practice, self-reflection, productivity, and social and political action – are all important components of a brilliant life. But none of them on its own was the central key.

You just read an excerpt from my latest book, Radical Brilliance! If you like what you just read, and want to explore these themes more deeply, you can read more excerpts on my website, or grab a copy of the book on Amazon.